Tasmania and the Royal Hobart Regatta

For the second time this summer we are over in Hobart (Tasmania). 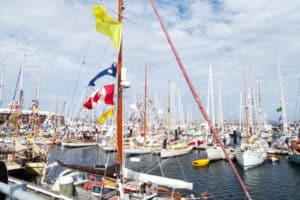 On this occasion, we have had the luxury of adding on a couple of extra days prior to our Tasmania Escorted Motorhome Tour starting so that we could have in depth look at Hobart.  We were fortunate that this weekend coincided with Tasmania’s Royal Hobart Regatta which is held every two years in Hobart.  As with most cities, the best way to explore is to get out and walk, but if you are unable to do so, there is a Hop-On/Hop-Off topless double decker bus covering all the City’s highlights.

Hobart is a very picturesque undulating port city and is very much the old mixed with the new and plenty of parks.  Old colonial buildings are to be found around every corner interspersed with modern architecture.  In some cases, the facades of the old buildings are being retained with modern buildings being erected behind. Side walk cafes and bars are dotted throughout the City.

The Salamanca Market is your usual Saturday morning market but on a huge scale, showcasing local hand crafts, fruit, vegetables and a myriad of multi-cultural food outlets.  Buskers entertain the friendly crowd wandering through the stalls looking for something different.  A short walk from there, up Kelly Steps, leads to the quaint historic suburb of Battery Point.

No tour of Hobart would be complete without visiting the site of the historic Cascades Female Factory.  This can be accessed by an enjoyable walk along the Sandy Bay Rivulet track.  The women’s factory was set up in the early 1800’s to house female prisoners from England.   They were marched up from the docks to the factory in the dead of night.

This five-kilometre trek became known as the walk of shame.  Some women were released into the community as servants, farm workers and wives.

The Royal Hobart Regatta is held down at the waterfront which caters for all ages.  It is a very picturesque spot and everyone from all walks of life are free to walk up and down the wharves at their leisure which covers a huge area.

There are plenty of food stalls situated in various areas which showcases all cultures and the prices are very reasonable, although there are the bigger and more expensive restaurants you can eat and drink at as well.  Very talented entertainers are sprinkled everywhere with all types of music being played and they have cleverly set everyone up so they don’t overshadow each other.  A variety of Museums and Art Galleries are also to be found along with many antique shops reflecting the city’s rich colonial history.

The boats are in their specific categories and areas and the programme is varied with competitions being carried out now and again in different areas.  People can pay to experience going for a sail on different boats from the tall ships to a steamboat!  Overnight, during our stay in Hobart, the biggest cruise ship in the world arrived and towered over its vicinity in all its splendour.

The tall ships and cutters looked fantastic sailing out from the wharf then hoisting their sails to catch the wind that was blowing.  Back, further along, was a man in a dinghy playing a monkey organ and a bugle. In the marina section, there were hundreds of wooden boats and those with masts had colourful flags flying from them.  A lot have turned up for the weekend to enjoy the festivities this year!

If you are interested in looking at heading over to explore Tasmania, get in touch with us if you are looking for motorhome hire and we can find you the best deal to suit your needs and requirements.