In a remote and largely inaccessible part of Central Queensland is a tangle of sandstone tablelands and ranges, featuring carved out ravines, gorges and freshwater springs that form the beginnings of many of the state’s rivers and water systems. 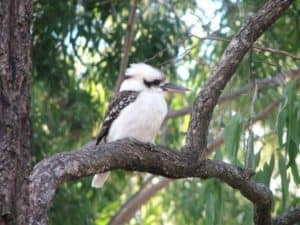 This area is collectively known as ‘The Roof of Queensland’ and at its heart, you’ll find the magnificent Carnarvon Gorge National Park.

Now easily accessed by the newly-sealed road, this national park is home to some of the most awe-inspiring walks in Queensland.  One of our staff members recently took her young family to Carnarvon Gorge in their motorhome – read on to hear a little about their fantastic experience below!

Before we’d barely parked the motorhome at Takarakka Bush Resort, we’d spotted an echidna and pretty faced wallabies right beside our camp. We knew it was going to be good to spot wildlife, but didn’t realise it was this good and only a short stroll to see a platypus playing in the creek.  The first evening, we enjoyed drinks and a spit-roast dinner on the deck as a local guide gave a talk on Carnarvon Gorge.

We weighed up our options and decided to shoot for ‘the big four’ the following day.

We set off nice and early, aiming to be back before 2pm, which is the hottest part of the day.  We decided to follow the main gorge walking track as far as the Art Gallery, then work our way back, detouring to all the main features along the way.  A total of distance of 13kms.

We had concerns about the kids (aged 4 and 6) losing interest quite quickly, but we needn’t have worried. The walk started off with stepping stones across the sparkling water of Carnarvon Creek and the adventure just continued from there.  Every turn took us into a different environment – a sandy river bank one minute, a shady cycad forest the next, all surrounded by breathtaking views.  The kids had a ball scrambling up rocky slopes, balanced on logs and discovered little caves.

We reached the Art Gallery mid-morning, but due to the early start we made this our lunch stop as we checked out the amazing Aboriginal rock art, some up to 4,000 years old.  Information boards gave insight into the paintings, which depict hunting methods, treaty agreements and fertility symbols.

The next stop was everyone’s favourite, Ward’s Canyon.  A short steep walk up some stone steps beside a waterfall take you up into a tiny gorge…and another time!  It feels like you’ve walked into air-conditioning as you step into this cool, hidden garden of moss, gurgling springs and giant king ferns – the only place in Queensland where they still exist, outside of the tropical rainforests in the far north.  We’d been told it was safe to fill up our water bottles here (so we did!) near where the rare red algae was growing, as it can only survive in pristine water.

The Amphitheatre is located at the top of a steep cliff, so we needed to climb a series of sturdy steel ladders to reach the entrance. Then, after walking through a large crack in the sandstone cliff, we came out into a massive cool sandstone basin with ferns growing all around, and 80 metres of sheer white walls towering up towards a hole in the roof far above us.  It’s almost mandatory to try out your vocal chords here, and many people report being treated to some amateur opera or a stirring  ballad…but I bet no one else can say they experienced an enthusiastic rendition of ‘Super Chicken’ (as delivered, to the great kids’ delight, by an American friend).

On to the Moss Garden, the last detour before the walk back to the Visitor Centre and the motorhome.  At the turn-off, everyone was feeling hot and tired and we seriously considered carrying straight on, rather than do the extra 1.3kms return, however we were so glad we made the effort.  It’s a magical place – natural spring water has filtered down through the sandstone walls of the little canyon over thousands of years, and when it hits the shale layer about half way down, it flows out of the wall, creating little riverlets and a thousand droplets that dance over the moss and maidenhair ferns which cover the lower walls.  It was absolute bliss to sit quietly in the cool serenity, taking in the sounds of the little streams and breathing in the sweet smelling fresh water and moss.

We had been warned that the last 2.8 km from the Moss Garden turnoff back to the Visitor Centre would be the toughest, and they were!  This stretch is less exciting than the rest and we were tired! With a few piggy-backs, camp songs and some serious bribery, however, we made it back – all proud and exhilarated that we’d made the huge 7.5 hour walk – what an amazing adventure!

The following day we had the opportunity to check out some of the shorter walks, which were fantastic for the kids and a very relaxing way to end our trip.   Baloon Cave is a pretty 1km return (wheelchair friendly) stroll to see some Aboriginal rock art. To the kid’s disappointment, however, it’s more of a big ledge than a cave, though.  Baloon Cave marked the entry point into the gorge for the Aboriginal people.  Micky Creek Gorge is a must-do.  It’s 3kms return if you stay on the formed track…but most continue on into the beautiful narrow mossy gorges.  Last but not least Rock Pool, only 600m return to the car park and one of the only places in the National Park where you are allowed to swim…with turtles to keep you company!  A great choice for a cool dip after packing up camp.

If you are picking up your motorhome from Brisbane, then you might want to incorporate this into part of your trip. We’d recommend taking at least 3 to 4 days out for this adventure and we highly recommend doing it.

You can check out our vehicle options here, then get in touch with us and let us help you plan your trip and get you the best vehicle and deal to suit your needs. It’s what we do best!