Norfolk Island - before the motorhome holiday in Australia

A tiny Australian island located in the South Pacific Ocean, which lies closer to the northern tip of New Zealand than it does the east coast of Australia, forms one of Australia’s external territories, and is a popular addition to incorporate with an Australian motorhome holiday. 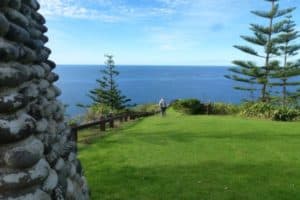 It is a beautiful lush green island defined by pristine white sandy beaches, pine trees and jagged cliffs and was described by its discoverer Captain James Cook as ‘paradise’ – a term he did not use liberally in his journals!

This paradise island, from 1788 to 1854, became a harsh penal colony and home to hapless convicts. Its history has changed somewhat over the years and is now home to the descendants of the Bounty Mutineers whose warmth and hospitality have been woven into the islands unique and timeless tempo – this island has quite a unique charm that draws back its visitor’s time and time again!

Clients of ours, Kay and Geoff who recently hired a motorhome with us, popped over to visit Norfolk Island before their motorhome adventure around Queensland from Cairns.  They supplied us these fabulous images, and noted some of the islands rich history such as learning that:

“There had been 2 convict settlements on the island.  When the first settlement went back to Sydney, they destroyed all the buildings, livestock and crops – so the ‘evil’ French could not move in and claim the Island for France.

The second settlement was left intact when they were sent back to Sydney, and everything was left for the benefit of the descendants of the survivors of the Bounty from Pitcairn, who were given to them by Queen Victoria, as their island. It was said that at only 40 acres, the island was getting to be too small for the population!”

The climate on this island peaks at its hottest of around 26 degrees in the summer and lows of around 10 degrees in the winter, making it a marine subtropical climate – best characterised as mild and great to visit all year round. Most rain falls between April to August, so if you are looking for sunnier and warmer days then avoid the middle of winter.

Norfolk Island is home to many native plants; 51 of them being endemic with 18 of those endemic species being rare or threatened. It is also home to the tallest tree fern (Cyathea brownie) in the world.

Its fauna plays an interesting part for the island too as it has been identified as an important bird area as it supports entire populations of the white-chested and slender-billed white eyes, Norfolk parakeets and Norfolk gerygones. The island also boasts a botanical garden, which is home to a sizeable variety of plant species.

If you find yourself on this island, there are a selection of activities and tours to choose from, you certainly won’t get bored. Check out the Norfolk Island Tourism site here to find out more information.

If you are looking at planning a motorhome trip ‘Down Under’, check out the vehicles we offer here and get in touch with us to see what deals we can pair you with and get you the best vehicle to suit your needs for touring Australia after your ‘side’ adventure in Norfolk Island.  No motorhome hire in Norfolk Island as yet, but we do suggest hiring a car as soon as you get off the plane, rather than waiting until the next day.