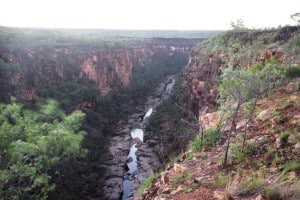 Porcupine Gorge is about 60 km north of Hughenden.  Hughenden is a popular stop over for those travelling between Townsville and Mt Isa along the Flinders Highway.  This could be part of an adventure from Cairns with a loop up to Normanton and Kuranda, across to Townsville via Mt Isa before heading back up the coast to Cairns.  Or perhaps you’re going further afield to Darwin, or travel up from Brisbane.

From Hughenden, meander up the sealed Kennedy Development Road to the first stop point – the look out over the gorge.  The 60 km drive itself was quite interesting and definitely had the feel of getting off the beaten path.  We took our time admiring the scenery, while keeping a lookout for unfenced stock and other wildlife such as the odd kangaroo.

The lookout is a 2km detour off the main road.  It’s a short stroll down a concrete path to the lookout over the picturesque gorge.  There is no overnight camping at the lookout car park.

Further along the Kennedy Development Road, is the turn off to the camping area which is where we found the access track to the bottom of the gorge.  In total, it is just over a 10 km drive along a sealed road from the Lookout.  We enjoyed a night at the campground under a stunning star lit sky.

We were very keen to make our way down to the bottom of  the gorge to explore the ancient landscape.  Erosion has removed the hard basalt cap from the lava flows and some of the soft sandstone, leaving a deep colourful gorge, with some rocks dating to over 600 million years old.  We’ve heard people refer to Porcupine Gorge as Queensland’s answer to a mini ‘grand canyon’, and we’d probably have to agree – although definitely a mini version, with the track down to the gorge only being just over 1 km.

As with most gorges the access down is pretty easy, allowing 15 – 30 minutes depending on your fitness.   There are plenty of areas to explore in the gorge itself, however make sure you leave enough in your tank to get back out again.  There are a couple of seats along the way and the odd tree offers some welcome shade.  Allow 20 – 60 minutes to walk back up, again, depending on your level of fitness.

In the gorge we saw towering cliffs of coloured sandstone, pockets of vine forest and deep permanent waterholes along the Porcupine Creek.  It is such a contrast to the savannah plains surrounding the Gorge.  In summer, the wet season, the creek becomes much larger and fierce which has caused the erosion.  Over the years the erosion has left behind a pyramid shaped colourful sandstone rock in the middle of the gorge which is what the camping area is named after.

Depending on the time of year, the creek may be flowing or have deep permanent waterholes which are important for the birds and turtles which can be spotted while in the gorge.  Around sunset the camping area and gorge is a great place to be, as your chances of seeing the wildlife in the area increase.  There are wallaroos and kangaroos, plus quite a number of different birds to enjoy.

The camping area is in savannah woodland area.  There are approximately 20 camping site, some have shade, however it is fairly open and fires are not allowed here.  There are compost toilets in both the camping and day use areas.  The camping area was not very busy when we were there in April, and the information centre has advised us that usually there is no issue with site availability – however if you are travelling during a peak holiday period, it may be worth your while booking in advance.  At our time of travelling (April 2013) the cost was AU$5.45 per person/per night, with payment being via a self-registration process, or you can book Porucupine Gorge online or call 13 74 68.  The information centre at Hughenden is also very helpful with providing extra information on the gorge and can assist with bookings if necessary.

The camping area is open year round; however access to the gorge could be limited in the wet season.  As with most areas in the northern half of the country, the most popular time to visit is in the winter (April – October) when the climate is most pleasant.  It can be cold at night time.

After your visit to Porcupine Gorge, if you are travelling in a 2WD campervan rental, you will need to retrace your steps back to Hughenden before you continue with your adventure.  For those travelling in a 4WD, you could consider travelling further north on the Kennedy Development Roadwhich eventually comes out into the Atherton Tablelands behind Cairns.  At the present time this part of the road is still unsealed in many places and does become a 4WD track only, after rain.  There are plans to eventually seal the entire road.

We really enjoyed our time in Porcupine Gorge, near Hughenden.  These days, there is really nothing stopping anyone from having their own adventure in the Australian outback and  a campervan rental or motorhome rental is the perfect way to do it.

For more information on campervan/motorhome hire in Australia contact get in touch with us and we’d be happy to help.