The beauty of the regions directly south of Perth, is that you can see so much without having to travel very far at all! 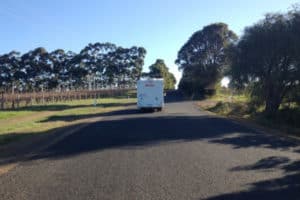 On our recent family motorhome holiday, as we only had a short timeframe, had us spending the first few days in the Perth region, discovering the city, Fremantle and beautiful Rottnest Island. You can read more about the other part of our adventure here.

Rested and relaxed with a pretty good feel for the history of Western Australia under our belt, we then set off to hit the open road to spend a week in the motorhome exploring the areas lying to the southwest.

We decided to hug the coastline down to Augusta, then head inland and meander back up to Perth through the forests and national parks.

Even before we’d left the ‘burbs’, the coastal road heading south was so spectacular that it was hard to resist stopping every 5 minutes.  Consequently, we didn’t stick to our planned itinerary at all, but that’s one of the biggest joys of travelling in a motorhome…being able to be spontaneous, stopping wherever you choose and working the day around the family!

After stopping off for lunch at Point Peron (where you can catch a boat out to Penguin Island) we arrived into the pretty Mandurah area, surrounded by a string of inland lakes and estuaries, and decided to make it our camp for the night.  It’s a popular fishing and crabbing area, meaning there’s lots of choices of waterfront campsites, but the big drawcard for us was nearby Lake Clifton with its population of thrombolites.  Looking like large stones lying beneath the clear shallow water, these ancient communities of microorganisms are among the world’s oldest living things.  The ones we visited here at were over 2,000 years old!  Nearby Preston Beach in the Yalgorup National Park was a worthwhile stop too, with pure white sand and huge waves.

After stopping briefly in Bunbury to climb the Marlston Hill Lookout Tower and enjoy the views over the town and the harbour, we meandered our way down to Geographe Bay and the little holiday town of Busselton, which boasts the longest wooden pier in the southern hemisphere (1.8 kms long!) complete with an underwater observatory and a miniature train!  It’s practically an institution to grab fish and chips for dinner and watch the sunset here…so we did – and it was wonderful!

The next few days in our motorhome were spent exploring the stunning Eagle Bay, Cape Naturaliste and the Margaret River region, which are all close by.  I’d never heard of Eagle Bay before we arrived – but we were told by a lady at our campsite that we mustn’t miss it.  I should buy her some flowers – I don’t think I’ve ever seen such magnificent white beaches and the sheltered crystal-clear water was perfect for a swim, as we watched the humpback whales breaching off the coast!  Having small children, gone are the days of vineyard hopping around the Margaret River, but we managed to squeeze in a couple of wine and olive tastings between the many other family-friendly activities found in the area.  Everyone’s favs were the Margaret River Chocolate Factory (you must try their bacon and maple syrup chocolate!), the Yallingup Maze and the spectacular Lake Cave with its beautiful formations and underground river; one of many caves found in this area.

Then it was on to Augusta.  The weather changed on us at this point and it became quite cold, wet and windy – excellent weather for visiting the historical Cape Leewin Lighthouse, which has stood proudly since 1896, marking the spot where the Indian and the Southern oceans meet, and Australia’s most south-westerly point.  Thanks to the fierce wind and the excellent self-guided tour, we got a real sense of the hardship that the early settlers must have faced.  We warmed up with a stroll along the boardwalk from camp that ran beside the Blackwood River and watched the dolphins rounding up their dinner, before we rounded up ours at the rather understated Augusta Hotel which enjoys panoramic views out across both the river and the coast.

We now had a couple of days to make our way back up to Perth via the inland.  The scenery transformed around us again as we entered the magnificent Southern Forests region.

Up until this point, we’d stayed mostly in caravan parks, but now there were a lot more options to stay in free or low-cost camps in the National Parks and little towns wanting to attract visitors.  On the whole, the free camping was probably the better experience – our favourite (although there were lots of lovely ones) was the Big Broom Arboretum in the middle of a big Kari forest just outside of Pemberton.  There was a communal campfire in the evening and lovely walks through the forest and around the dam leading straight from camp.

This area is famous for walking and for giant tree climbs.  The most famous is the Gloucester Tree, but there are several of these colossal trees that you are able to scale (fitness and bravery levels dependent!) via a series of metal spikes that have been hammered into the trunks, in order to survey the forest and beyond from the swaying top.  These incredible giants were originally used as bush-fire lookouts.  We didn’t make it to the top (much to the relief of a nervous family member who will remain unnamed) but it was still a great view from the half-way point!

Despite being much quieter than the coastal region, there was no lack of things to see and do on the way back as we drove through lots of lovely little country towns, forests and farmland, dotted with orchards, wineries and cheese factories.  One unexpected delight in this region was Gnomesville.  Beside a quiet country road, in a pretty forested spot surrounding a creek is something a bit magical – tens of thousands of garden gnomes!  This place started when a local man placed a gnome on a felled tree during the construction of a nearby roundabout in the late 90’s…and it took off!  Now there’s tens of thousands of gnomes from all over the world!

Another surprise is the biggest kids’ playground in Western Australia which is located not too far away in a tiny country town – Apple Fun Park. It’s definitely worth a stop if some energy-release is required after a long drive!

As we returned to Perth and prepared to fly home, it felt like we’d been away for a lot longer than we had.  We’d seen so much, enjoyed so many amazing experiences and made memories that will last a lifetime….and we did all this in just a couple of weeks!

So if you’re thinking of ideas for a family motorhome holiday in Western Australia, this is definitely one to add to the list! You could also check out some of our other routes we suggest touring in this spectacular part of the country.

Be sure to get in touch to see what savings you could make on a trip down under and check out our vehicle hires here!