Weather travel tips and when to hire a motorhome in Australia

The Australian climate can be very confusing, even to our Australian travellers!

We often get asked for motorhome hire up in the Northern Territory over our summer, but as it is the wet season, travel is not usually advisable! The climate in Australia can be complex to understand, so we’ve written this blog to help explain when to hire a motorhome hire and the best time to explore the various states/territories.

Contrary to what some might think, Australia isn’t just a hot, dusty continent all year round. If you happen to be coming from the Northern Hemisphere, the seasons are reversed…and the water goes down the plughole the opposite way! What this also means is that if it’s summer in the northern hemisphere, it’s winter here in Australia.

The climate in Australia is generally very pleasant and mild in many areas. Most of the country receives more than 3,000 hours of sunshine a year. That makes it a great location for motorhome hire, to be out on the open road, exploring every nook and cranny of this amazing country!

Due to the vastness of the country, Australia has 6 climatic zones and two main seasonal patterns. 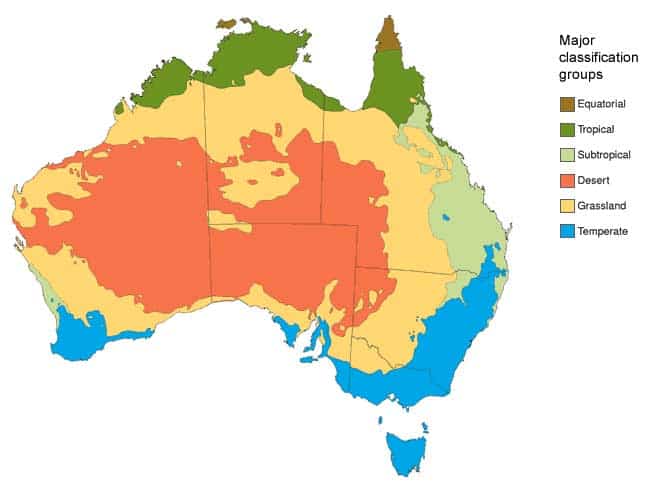 In three of the zones, the Temperate, Desert, and Grassland zones, we have a spring, summer, autumn and winter season. Whereas in the equatorial, tropical and sub-tropical zones they essentially experience a wet and dry season. Therefore, depending upon where you are, the climatic conditions will be dependent on which climatic zone you are in i.e. temperate or tropical.

Seasons in the temperate zones

The temperate (blue), grassland (pale yellow) and desert (pale red) areas on the map highlight the zones that have the four seasons: spring, summer, autumn, and winter.

Seasons in the tropical zones

The other three climatic zones are in the tropical areas of Australia and is shown by the equatorial (brown), tropical (dark green) and subtropical (pale green) areas. These regions in the north and northeast of the country experience high temperatures and high humidity and have two distinct seasons:

So, depending on your holiday preferences and types of activities you like to do, the weather is going to play a huge part in your choosing where you want to go with your motorhome hire.

The eastern coastline from southeast Queensland, down the central coast around Sydney and down to Melbourne and the Victorian coastline are Australia’s most populated areas. This stretch enjoys a pleasant climate most of the year and the ocean waters play a big part in these types of holidays.   The further north you travel the hotter and humid it becomes with the southern area of the country experiencing the four seasons and less humidity.

The stretch from Mackay in Queensland to Port Macquarie in NSW, almost 1,500km of coastline, is often described as having the best weather in Australia all year round, making it the perfect getaway destination any time of year.

For a very different experience, the West Coast of Australia experiences hot, dry summers and mild winters. In the south-west, the climate is temperate with four distinct seasons but the further north you go the climate becomes tropical with two distinct seasons: a wet season and dry season. The driest areas are in the centre which has an arid and semi-arid climate.

Some of the best beaches in the world are found here on the west coast of Australia and some incredible iconic landmarks are found inland in this state too.

The northern region of Australia is distinctly different to the rest of the country as it has two distinct seasons wet and dry. Temperatures don’t differ greatly throughout the year, but you will notice the difference in the humidity which is the biggest indicator as to what time of year it is! The dry season is generally between May and October and is characterised by warm, dry sunny days and cooler nights and the more popular time for a family motorhome hire with wet season ranging between November and April is characterised by humidity, monsoonal rains, and storms.

The climate in the desert

Because there is so much variation in the weather across the country, we strongly recommend you chat with one of our experienced team members when planning your trip to ensure you are heading out on your dream motorhome hire holiday at the right time of year!