A short trip of about an hour and a half, and 91 km north of Brisbane you’ll stumble across the Sunshine Coast Hinterland and few hidden gems up there too! 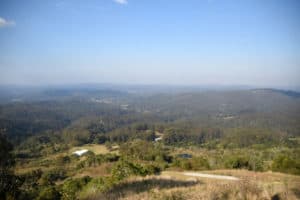 It’s a favourite spot for one our members of the Gallivanting Oz team. They recently set off on a day trip to explore Kondililla National Park, a cool mountain retreat.

Kondalilla National Park is in the Blackall Range of South East Queensland, has easy access and it is an incredibly picturesque drive to get there, driving up through the hinterland with glorious views out over the Sunshine Coast and the Coral Sea.

The park is named after the spectacular Kondalillia Falls (Kondalilla, an Aboriginal word meaning ‘rushing water’), where Skene Creek falls 90m into a rainforest valley. Unfortunately, at this time of year, which is dry season, it wasn’t so much of a waterfall but more of a trickle.

However, it didn’t deter our Gallivanters from exploring the luscious subtropical rainforest and walks in this beautiful national Park. They ventured out on the short walk of 2.4km (return) to the rock pool above Kondalilla Falls, which was suitable for their family which included two young children, the youngest being 4.

The rainforest is home to 107 species of birds, 7 species of reptiles (a resident goanna was spotted on this trip), 32 species of frogs have been seen in the park including the pouched frog. It is also home to the bopple nut AKA Macadamia integrifolia – a tree which is vulnerable to extinction.

There is a beautiful picnic area 50m downhill walk with steps to a large grassed area. There are toilets, picnic tables and BBQ’s.  It was a great spot to refresh yourself after a beautiful trek through the area.

Access to the park is suitable for motorhomes as bitumen roads lead to the National Park. The Park is only open during daylight hours.

If you are thinking of hiring a motorhome from Brisbane and exploring parts of Queensland, then a trip to the Sunshine Coast Hinterland is a must! You can check out some of our other suggested Travel routes to get some ideas for your journey around Australia.

If you are looking for motorhome hire, get in touch and we’ll make sure we pair you up with the best deal and motorhome to suit your needs.